Startupalooza in the News: So this is what we do....prepare you for the Sharks!

Read the full story in the Stamford Advocate

Alan Brody's first question Tuesday was innocent enough: Describe your startup to an “angel” investor you are meeting for the first time. It was successive variations of his next question — hammered home again and again to individuals attending Stamford “Startupalooza” — that knocked most off their pedestal: “Do you remember what they do?” In most cases, participants admitted they had only a hazy recollection of the business summaries they had heard less than 15 minutes before.

Billed as a chance for entrepreneurs to get coached up on how to get the attention of angel investors — then get the chance to do just that — Stamford Startupalooza was held May 24 at the Workpoint co-working facility at Shippan Landing on Stamford’s waterfront. Unlike Startup Stamford Weekend held annually at the Stamford Innovation Center to convene teams to develop business plans, Stamford Startupalooza included several companies already well down the road of bringing a prototype product to market.

“What I really care about is how do I get rich by giving you a bunch of money?” Brody said of the typical angel investor’s perspective. “The reason they call it the ‘elevator pitch’ is you’ve got 30 seconds — when the door opens, you are free to leave. ... The question is what would you say so that even when the door opens, the (investor) doesn’t leave?” Workpoint hopes to host Stamford Startupalooza three times a year, according to Sheelah Quinn, the facility’s general manager and head of sales, with the inaugural event Tuesday sponsored by McCarter & English and Fiverr. The forum showcased several intriguing ideas ranging from the Vidpal on-demand video service for broadcaster use — the winning pitch by John Ortega — to a way to help baseball players learn to hit effectively regardless of pitch location. Entrepreneurs struck out time and time again with angel investment experts, however, with their “elevator pitches” eviscerated as woefully forgettable.

In advance of a “Shark Tank” style pitch competition, Brody was joined by Sandy Wollman, an organizer of Westchester Angels in New York, who likewise spared no quarter as participants gave their best efforts at how they would go about chasing down his investment dollars.

“Respectfully — nobody got my attention,” Wollman told workshop participants. “Any time you are talking to an angel investor, you only have one goal: get to the next conversation. One of the mistakes startups make is that they go into so much detail about their product. ... I want to know what you do — in one sentence.”

In the case of the baseball device, Wollman did just that in boiling the concept down to a pitch that might catch his notice: “‘I’ve been a baseball player my entire life and I’ve developed a way to make batters better baseball players; and as a matter of fact, I’ve shown this to ... Joe Torre and he is very interested in my idea.’

“I’m in,” Wollman continued. “You caught me right away with what you do — you’re making a baseball player better (and) you have a proprietary way. ... What you’ve done is you’ve gotten me to the next conversation.”

Putting Out FIres in DC - Report, from May 12 Event 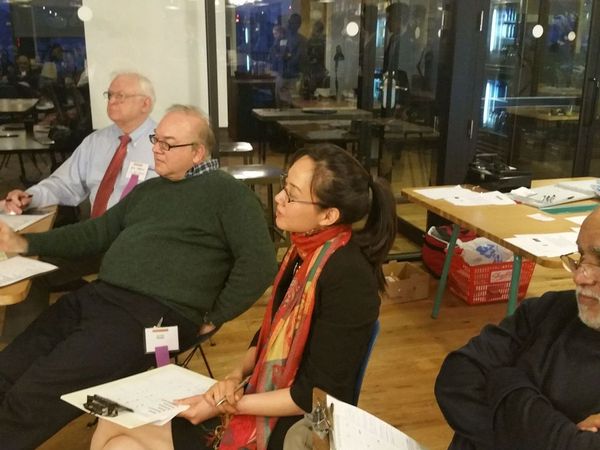 The first Startupalooza in DC was exhilarating and eye-opening. Beginning with the Fundable: Capital Workshop which grew so big it had to be moved to a larger room, this was a great turn-out.
The evening pitching event – with the opening presentation from the patent office about IP protection options and special pricing and the use of provisional patents was very helpful
The pitching was enlightening and revealed a broad swath of new ideas.
The winner was:
SupressionOne
Mark   Baldino Owner mbaldino@baldinos.com     703-906-3154
This is a smoke detector that also puts out fires with a sprayed, powdered fire suppressant. Compact, cheap and non-destructive, this has the potential to show up in every home, promoted by stove companies and subsidized by insurance companies.
Mark Baldino of SupressionOne, is going to the Private Equity Forum at the Yale Club in NYC.

The Runners up were:
Gastro Girl
Jacquelin Gaulin gastrogirl.com
Affinity meeting, advice and referral site for millions of people with gastric issues.
Comments: The founder has experience in the health field and the possibility of a Big Pharma buy in would make all the difference. However, there is a proliferation of patient affinity sites over specific medical issues and there could be competition for sponsor dollars.
kitchology
Alain  Briançon    CEO    alain.briancon@kitchology.com         301-972-5380 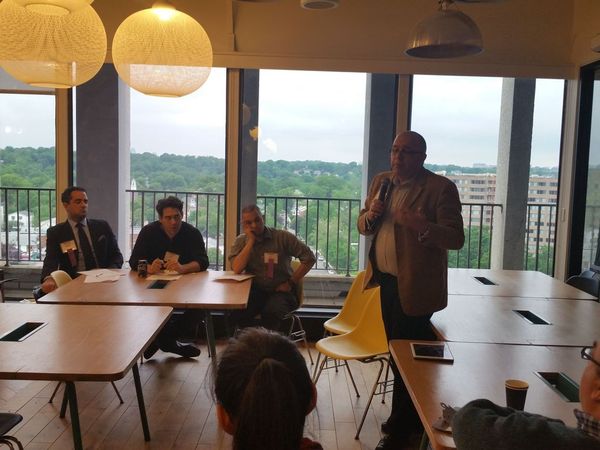 Kitchology is the first integrated platform for special diets, available through the web and mobile app to the 160 million Americans dealing with special diets. This automodifies recipes for their dietary needs and prepopulates shopping lists and make product recommendations. Extensive use of machine learning, filed six patents, developed a proprietary database, federated 250 food allergy bloggers. Brands pay Kitchology for promotion, referrals and license to analytics. 200,000 monthly users, in discussions with major brands.
Comments: Strong idea and presentation but business model relies on food company buy-in.
ErgonometriX, LLC
Marc   Cohen  CTO & Co-Founder   marc@ergonometrix.com       301-509-7394
ErgonometriX prevents Lower Back Injuries through the use of technology: a wearable device with the motion of the employee is captured and analyzed in the cloud and medically supervised.
Comments: Intriguing but some considerations of competitive products and then large scale customer acquisition.

Mechanodontics
Mechanodontics is making a new type of braces which will reduce treatment time significantly, be behind the teeth for aesthetic purposes, and be fully customized through a computer automated process.
Comments: This is a great idea by two young practitioners. However, they lack a good industry adoption plan since they are likely to meet resistance by orthodontists.
Special Mentions for:
DC Gun Range – this one-of-a-kind deal got enthusiastic response from the judges, but can’t scale to other cities
Duck Cancer - helping make the lives of cancer patients better is a great idea and a large market. Although the idea was not fully formed, the judges liked the passion and commitment of the engineer presenting it.
Posted by Startupalooza at 5:02 AM No comments:

Report from May Philadelphia, May 11

Philadelphia, May 11
As advertised, Startupalooza is truly a pitching network of Angel networks.
Accordingly, the winner was Pinch, a startup that travelled down from Boston and won with their idea for a marketplace of services based on peoples’ unique passions and avocations. This taskrabbit-type service allows people seeking unique experiences to find and hire the providers of these unusual, hard-to-find skills.
This is a new idea with a profit model and followers. It has some questions about its viability but the presentation was filled with enthusiasm and a sense of discovering a new marketplace.
Congratulations to Aakash Goklani of Pinch, who will be going to the Private Equity Forum at the Yale Club in NYC.
The Runner up was Habitat, a food delivery service for campus’ by Andrew Nakkashe. While this business is mildly profitable and seems to be well executed, the startup founded by students is still shadowed but the student-startup syndrome: ideas common in colleges do not necessarily travel to the real world where there is no shortage of competitors. Nevertheless, the founder impressed the judges with his crisp presentation and determined composure.
Posted by Startupalooza at 4:41 AM No comments:

How? One is that we give more Entrepreneurs more access to more investors than any other event - for arguably the lowest possible fee.

Another, even more important reason - is that we monitor the feedback from Investors. We can tell you what they really think and more importantly, what to fix so that you can become Fundable.
A great example is Nomi Beauty (formerly Gloss & Glam) which offered a virtual hairdresser service that spared hotels the expense of setting up and maintaining an in-house hair salon.

What we quickly found was that Investors weren't that interested in helping out hotels. What excited them was that women execs would be highly interested in hair services in the convenience of their rooms which they could also put on their hotel bill making it easy to expense.

That brings up the 3rd reason: the Investor was from out of town. The beauty of the multi-city Startupalooza model is that we have networks of Investors throughout the northeast corridor. The Investor in Nomi was not from New York but in our network from the MidAtlantic region.

So we not only work locally, but we circulate deals throughout the Boston-NewYork-Philadelphia-DC corridor, where everyone dramatically increases their chances of finding the right Investor - and Investors, the right deal.

Opening in Stamford, CT at Shippan Landing waterfront, May 24, 4 - 9 pm. [Register]
Posted by Startupalooza at 8:31 AM No comments:

Just when you despair of America's technology prowess, you find out what the next generation of youth are capable of inventing.

Just as exciting is the fact that this award program was supported by our lead sponsor, Fiverr.

The Dream it. Code it. Win it. program in May, introduced student's ideas that could have an impact on the marketplace today.

Aside from a 3D printed prosthetic hand, visual programming solutions and so on, we loved the stick-on circuit board product. Instead of a "bread board", you can actually build circuits with sensors and so on just by sticking them on a sheet of paper and then illustrating the system flow. This is an amazing bridge between DIY programming, hardware building, prototyping, hobbyist projects and education.

Just as illuminating are the young multicultural teams creating these ideas.

It is not hard to see that tech creativity is alive and well. More than that is the realization that motivated kids with an idea are a fantastic educational paradigm that will fundamentally change how kids are taught: why bore them with the rules of calculus when you can set them a challenge that makes them want to learn and use it?

Hats off to Fiverr, MIT Enterprise Forum, The Internet Society and Cooper Union.

Posted by Startupalooza at 7:34 AM No comments: