The Winner was:
Power 20
Arshad Chowdhury
Power20 is an exercise app for pregnant women that has over 1 million downloads.

The Finalists were:
AppFriends.me
Kejia Tang CEO kejia.tang@appfriends.me 413-884-4654
AppFriends.me is a plug in social layer for mobile apps. We utilize real time messaging and activity feeds to drive user engagement and stickiness inside of apps. 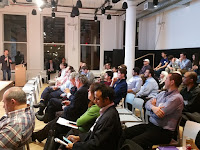 is applicable to anyone engaging in a water activity. The second product to be released is the Watercraft Shark Repellent. This product will protect people engaging in water activities around a boat. The top two products will launch in 2016. The third product that will be launched in 2017 is for the commercial fishing industry. The commercial fishing industry loses more than 30% of their catch due to shark attacks. This product will significantly reduce those billions in loses annually. 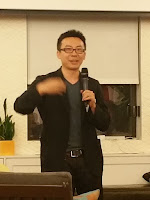 Vidpal
John Ortega + Kamron Hinatsu CEO of Vidpal john@vidpal.net 3477669318
VidPal allows the average person with a mobile phone or video camera to view and film different destinations. In Vidpal's real-time global video marketplace, individuals can find or request the video they only ever imagined. http://vidpal.co

Special Mention
MedifVU, LLC
Eileen Morrissey CEO eileen.morrissey@medifvu.com 973-570-4784
Our Digital Health App is personalized google for selecting medicines for a consumer choosing Over the Counter or with a doctor choosing Rx. It's a predictor of buying behavior for product advertisers and manufacturers. 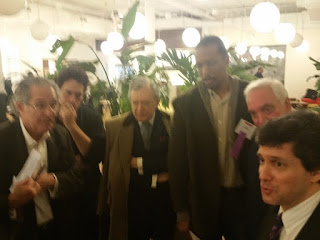 Posted by Startupalooza at 8:01 PM No comments:

A few more words about why I predicted in 2011 that a Donald Trump presidential run would be sensational.

Before reading this update, please be aware that I am not supporting or otherwise promoting the Trump presidential run. Politically, I am an independent who thinks the binary party system is ridiculous.

All I am doing is bringing you up to date on my original insight (How I Predicted Trump's Current Success) - and taking a victory run while reminding you why I had a 5 year advanced vision that turned out to be incredibly true.

(Sometimes this works with my investments too - but generally, only after they declare bankruptcy first!)

There is also a TV character angle that we need to take seriously because it actually worked for Obama and now seems to be working for Trump.  Yet almost no one acknowledges it - so I will.

The key points are this:

• Big picture guy. Trump, regardless of your opinion, was the first candidate I have heard talking about the world business market and political forces as a big picture - as a game if you will. Just as importantly, he is telling us what we are learning the hard way - we are no longer leading and not willing to make the tough structural changes, show strength or pull rank. We have become a influential player but no longer the leader. Other contenders including ISIS seem to have taken over.

• No politico. Trump came across as an outspoken CEO, not as a politician - and it was incredibly refreshing. Most of all, he did not speak as a lawyer like the typical approach of politician. We have become so accustomed to politicians being lawyers first that we have forgotten that, lawyers are really not trained for leadership but rather to work with rules, make arguments no matter how tenuous and behave cautiously. That is useful most of the time but truly bad if the country needs to reset itself for a new world order.

To this day, no other political candidate has been able to talk about rethinking the US role within the context of the new world realities of the 21st Century.

• What doesn't kill him, helps him. The negatives about Trump - his bankruptcies, sharp business dealings, incessant brand hawking, womanizing and his blunt opinions are actually working to his advantage. Even the virulent opposition and negative press has helped him. Why? Because he has become a proxy for the way the rest of the world now sees us. Most politicians want to be nice and seem able to calm down the rest of the world. Trump is willing to say, "the hell with them."  So the question is: which is more American and which is more likely to work?

Keep in mind too, that, technically, America is bankrupt since it owes more than it sells. Who better to get us out of bankruptcy than someone who actually knows how to bluster and wiggle his way out of bankruptcies! As for the womanizing, Hillary is going to have a hard time taking on the  issue because she is seen as her husband's enabler while Trump, for his infidelities seems to have a great bunch of kids in spite of everything.


On the down side.

Since I haven't heard big picture thinking from any politician since my days of college PoliSci when von Metternich, Zbigniew Brzezinski and Henry Kissinger owned that platform, I can see why Trump's statements stand out. Rather like a really strong peppermint - it's not for everyone, but it sure clears the sinuses.

On the other hand, Hitler and Mussolini had their own forms of big picture thinking. So did Mao and Stalin. Much of what has happened since WWII has been the West's aversion to that form of leadership because of the devastating downside. Yet, the US lingered on with Korea, Vietnam, Iraq and Afghanistan.

But to compare Trump to Hitler or even to Kennedy and Johnson, who escalated Vietnam or Bush's absurd nation-building in Iraq, is a stretch. In that regard, Trump the trickster is more like political inoculation than infection. He is just not likely to swallow some bible or manifest destiny playbook. He'll bluster and bully, carry a big stick and wag it vigorously but probably never use it.

You be the judge.

What Should a Candidate Do?

What does matter though, is if you are a political opponent to Trump, then you need to understand the following:

• Talk the Big Game. This is no time for blocking and tackling. Hail Mary's help. Most of all ,you have to have some really big ideas - or go home. Even Bernie's socialism - American political poison - had a great run because of his conviction.

• You can't play Trump's game. Trump's fire-throwing approach is sui generis. But even if you play your game, it has to be about the political revolution, but on the practical side. A definite opening exists for a high tech visionary who talks the new world vision. Obama tapped into it and strangely enough, Trump's crazy tweets send out a roughly similar message.

• Stand up for America? Like it or not, a significant number of Americans think we are being pushed around. Tell us how you would stand up to it. Being lawerly won't help. Your body language helps. Hillary's body language and deep voice mode is pretty good but she has yet to find the right "world fight" approach. Right now, she just has words. Would she really stand up to North Korea and bring back that student? Could she face down an ISIS long knife.....? Can she kick Putin to the kerb?

The TV Avatar issue
This is a high concept issue based on how most people really interact with their politicians. It's the TV, dummy - that's how we know them. Not only that, but it is who you remind them of that matters.

Obama is not the first black man to win worldwide public support on TV. Bill Cosby did it first. He became a Father Knows Best without irony, warm humor and a ton of cool. He was fortified and in some ways may have begot, Nelson Mandela. In archetypal terms, Obama is the redux of Cosby and Mandela. (The fact that Cosby turned out to be a highly questionable character could be a bit of a problem for Obama's legacy.)

Trump is Trump from the Apprentice who came across as a generally reasonable person in spite of his previously controversial reputation. The fact that his children turned out to be as impressive as they did is a huge plus. Trump's issue is wholesome, grounded in his business, unspoiled and highly supportive of him despite his womanizing past. Trump's worst nightmare may be any one of them getting arrested for DUI. This happened to the Bushes but meant little for GW. This would be devastating for Trump who doesn't drink or smoke. (Come to think to, nor did Hitler.....but then his hands were very, very small......).

The fact that people sometimes make fun of Trump as a comic book character like Superman isn't exactly hurting him. Subliminally, it is actually winning over a committed following.

The problem for Hillary is that she comes across as a lot more like Maude than Xenia or for that matter, Rhonda Rousey before losing to Holly Holm. This is main the reason she does not engender enthusiasm and has a bit of a male problem. People tend to resent bossy Mom figures. They just want go out on their own.......

Ted Cruz looks a lot like an early Nixon crossed with the Joker. He should hire a makeup artist to help him lose the chiseled face look. In his case it looks like sharp practice. As for the bible stuff - it is just way too old school.

So there it is folks. An honest, no-holds-barred view of the candidates.

If the candidates don't adapt, I predict that Trump will squeak by as our next Prez. For sure, every comedian in American will vote for him. But even the minorities that are supposed to hate him would prefer a tough guy who speaks up, than a wishy-washy candidate that says the right things but doesn't really look like they will stand up to bullies. Call it the law of the wild.......

People will also be reminded of just how ridiculous Ronald Reagan looked at the time, but he was the one ridiculous guy who was willing to stand up to Gorbachev, bringing down the USSR and changing the world order.

We still haven't lost our love for the John Wayne figure that Reagan channeled.......and to a lot of people, it looks like he just might be having a third coming....

Posted by Startupalooza at 11:11 AM No comments: