Open Season for Open Source
Entrepreneurs looking for new funding got an eye-opener to the future at the July iBreakfast. Top of the list - according to Steve Arnold, is that open-source is becoming a mandate for all government-related RFPs. If you are going after of City, State or Federal money - these are the magic words.

Crowdfunding
For Entrepreneurs looking beyond the tight VC market - where many, many deals are chasing very selective investors offering low valuations - PCMexchange holds hope for the future. Here Entrepreneurs can raise money directly from pools of investors online. While this technique has been tried (Wit Capital to Prosper) sooner or later the SEC has moved in to shut them down.

But now we are seeing a new way of dealing with this.

PCM Exchange uses a new combination of techniques - it is founded by a broker-dealer and only accredited investors get access to the site. But it is it open to all entrepreneurs. The advantages for investors are that they can vet the entrepreneurs as a group - saving them from multiple due diligences. For the investors, the site will offer a kind of stock exchange thereby offering liquidity for their holdings.

IndieGoGo offers a crowfunding source for film and digital content. The trick here is that the pubic does not buy equity on the film only the equivalent of sponsorship or bragging rights.

Additional report by Guilherme Cunha
Posted by Startupalooza at 8:12 AM No comments: 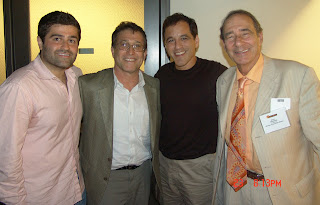 As the first in a new series of events that cover the funding of content - this iEvening got off to a rousing start. 3 investors spoke to a packed house about the opportunities and difficulties of raising money for a film project.

The key today is audience and distribution - and most of it is digital. The old days of having a screenplay and a prayer and more or less over. There are exceptions but most indie filmmakers have to contend with using the Internet to build a pre-audience, and distribution and marketing methodology.

Symbiotic Pictures, a new veteran-driven enterprise is actively looking for close-to-completion projects that they can place and leverage into a compelling deal. Marty Feinberg, talked about his movie investments with Penny Marshall and Martin Scorsese and the film projects he is looking at today. Slava Rubin showed how his site, IndieGoGo can help moviemakers raise money from fans and build an audience at the same time - a critical ingredient in getting studio attention. And money.

A variety of projects were pitched making a powerful impression on the investors. The star of the evening was Frederic King of Fountainhead Films, two of whose projects - Manuela, about Simon Bolivar's mistress (hints of Evita) and B.I.K.E a film about counterculture cyclists - got the judges' attention. We will soon be posting these pitches online through an arrangement with IndieGoGo.

Additional report by Guilherme Cunha
Posted by Startupalooza at 8:45 AM No comments: