Is Apple the Evil Empire?

Is Apple Really Evil?
As an old Apple person - I mean old as in covering Apple from way back in the now dead-and-gone Apple trade publications like MacWEEK, I can answer this very simply. They are not a technology company, they are a religion. They are giving us "cool people's technology" and they charge a tithe - about a 10% premium over non-Apple products - where they compete - and much, much more - where they don't. They expect followers to pay in blood sacrifice to be the first in line and rarely apologize when they abuse them for doing so. Likewise, their followers never really complain.

Some people say Apple is a cult - and they certainly are. That is why no one can really compete with them because they don't understand what it means to be a cult: You have to be very good, very important - you have to die in public - and then come back to life. That describes Steve Jobs and with him, Apple. No one in their right mind asks for this role but if it is foist upon you and you thrive - ordinary mortals cannot compete against you.

However Apple is more than a cult because they are just as passionately loved by ordinary users as they are by the geeky priest class. That makes them a religion. Because of that, Apple could survive the passing of Jobs.

So if you think religion is evil, then Apple pretty much is evil. You want technology heaven? You follow their path. That's how religions work. At least Apple delivered us from the temptation of illegal downloading, the darkness of Crackberry, the demon of Vista and so on. Then they made a deal with the devil - AT&T. This is like the cool early Christians, some gnostic - most not - teaming up with the Roman Emperor, Constantine. He made them bigger, established and formidable but something got sacrificed with that.

That's the deal we make with regular belief systems and Apple will not change any more than your favorite religion will. At least not fundamentally. So if you are talking about competing with Apple then you'll need some religion of your own because you can't seriously do this by numbers, or by the book.

Look at Microsoft - they were never better than Apple - but they got richer because they were anointed by a higher Power a/k/a IBM which gave them the exclusivity of owning their operating system. (Watch out AT&T!)

So all those Google/Android/Palm Pre iPhone wannabes take heed. You can do OK against Apple by offering better features, better mobile carriers, lower prices and blah blah blah. But you can't win unless you're willing to be great, die and come back to life - in public. Or get a higher power to anoint you. Become the official phone of the Obama White House with one free call to the man. Or put yourself at the heartbeat of youth culture - say, by buying up every major record label and film company. Or better than that, finance their talent directly..... Or pay for every kid's online college education.....

A few thoughts from the Aug 12 Mobile Apps Conference

(First, a little disclosure - since we covered this topic at the May iBreakfast, everything I say may be tinged with professional jealousy. Or, I may just be right.)

Not a lot came out of the Mobile Apps Conference that we didn't already know - other than the fact that marketers are waking up to the App Business and so it is about to get much bigger. Since we were able to cover in 1.5 hours most of what took a whole day to discuss - and 3 months in advance - you can see why the iBreakfast is in its 14th year.

Fremium Model: Almost all sales models are Fremium based - give away the sampler and upgrade user to the paid version. Expect a 1% conversion rate.

Make Ad Deals: Everyone who can't sell their Apps - and that would be the vast majority of developers - needs to find a niche with a true need or a way to make a deal with an advertiser. Often, these deals are about expanding the free sample universe so they can get a higher number of paid conversions.

Jason Calacanis Keynote
The one-time publisher of the Silicon Alley Reporter asked who remembered that swashbuckling publication from the heyday of rebel internet world. Of maybe 150 people, 3 hands went up. Note to self - marketers are young and constantly being replaced.

As founder of Mahalo - a people-powered search engine - Jason's rationale was talking about the Apps he'd like to see. With App saturation being the topic de jour, that was a fairly lame pretext (several of the ideas which he pulled from his people-powered search list were already Apps) to talk about what he really wanted to talk about: Mahalo and the Evil Apple Empire.

No point in discussing Mahalo and human-powered search here. They have their place. So do pedicabs and Central Park buggies. But the Evil Apple Empire is a great topic and delivered by Jason with much aplomb. It is such a rich discussion that I'll devote a separate blog....

Posted by Startupalooza at 10:17 AM No comments: 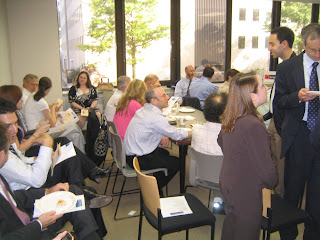 Does your town need to be part of the conversation? Talk to us about opening an iBreakfast in your city.
Posted by Startupalooza at 7:46 AM No comments:

The Obama Campaign and White Plains iBreakfast: Social Media and the Tipping Point

Michael Terpin, who helped engineer the "Yes We Can" viral video with will.i.am is speaking tomorrow. Aside from telling us how he got to 40 million viewers and tons of press - this is a great time to ruminate on the power of Social Media. After all, it brought us an entirely new kind of President.

We all know the usual - harnessing the long tail, word of mouth, crowdfunding etc. But what about the gradual mass change of opinion anticipated by Obama's literary doppelganger, Malcolm Gladwell. While he never mentions Obama, Gladwell, whose 3 books (Tipping Point, Blink & Outliers) are still on the best-seller list was talking about a change in state, and he too is bi-racial. His books talked abut the paving new ways while paving the way.

Social Media, in other words, is not only a tool but a kind of change predictor and instigator. We're going to learn more about this tomorrow. But one thing is sure - we have entered into a new world of doing business, the likes of which we have never seen before.

We need all the change predictors we can get!
Posted by Startupalooza at 6:48 AM No comments: