Esther Dyson in discussion with moderator, Paul Farkas.
Did she she help or hurt the new gTLD Program?
Posted by Startupalooza at 9:11 AM No comments: 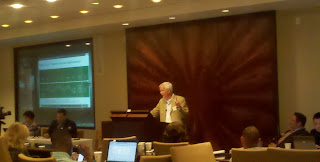 The iBreakfast NY and Smart TLDs hosted the first conference on ICANN’s gTLD program since it's passing at ICANN Singapore a month prior. New gTLDs will enable brands, orgs and trade groups to escape the dot and own a TLD in their own name.
While most of the speakers, following ICANN SVP Kurt Pritz's keynote were enthusiastic supporters of the program, Esther Dyson, a former Chair of ICANN, livestreamed her objections from a remote location. Noting that she couldn’t see much value in new gTLD’s and that ICANN's near $200,000 price was too much, she went on to make the point, “I wouldn’t want to be a cheesemaker if Kraft owned .cheese."
Paradoxically, Dyson’s neo-traditionalist objections seemed to heighten the value proposition for key players and conference attendees. While Dyson's point is that cocacola.com is just fine at the cost of a few dollars versus .cocacola at $185K which appears to offer nothing more. Unless, that is you see value in the very exclusivity and prospect of category ownership – which has made it seem so enticing for Fortune 1000 companies. [Dyson's audio transcript below]
As former Kodak CMO, Jeffrey Hayzlett made clear, brands would be foolish if they don’t get on board now. How would you look if your competitor has say, .pepsi and you soft dring company hasn’t even applied yet, he asked. This would be even worse if you were locked out of this application window and the next one is delayed for years.
The technical providers Verisign, Afilias and Neustar, as well as speakers from DotBrand Solutions, Aus Registry and Donuts, Inc., gave insight as to what the application process entails and why you need a partner to manage your TLDs once approved. The application is highly managed with about 80,000 words of explanation and procedural steps. Barry Werbin, a partner at host, Herrick, Feinstein LLP, showed a flowchart of the application process thatt was clearly daunting. This is not a path to be taken alone and will probably warrant legal help all along.
Importantly, there is a limited window for the gTLDS – applications begin in January, 2012, and if granted, they will require a major financial and technological investment to maintain.
ICANN's SVP of Stakeholder Relations, Kurt Pritz, outlined the process and made it clear that his organization has always looked for a transparent and non-combative process. The TLDs are meant to be given out judiciously, with trademark protections and without favoring individual groups over trade organizations and it offers an elaborate dispute resolution resource as well as an open auction process.
Despite the seeming lack of awareness and words of dissent, the early interest in gTLDs is potent – declarations of interest have already been raised for over 1,000 applications, indicating a possible market of close to $200 million at the starting gate.

Some of the more intriguing plans were DotGreen which would organize and essentially brand enviro-friendly companies. Likwise .gay would create a lifestyle brand and .Asia, already an established regional TLD, welcomes the changes in the web with new gTLDs, cityTLDs, as well as IDNs, to better organize and enable pan-asian expression.
The undisputed aspect of the gTLDs is that ability for non -oman character users – the so-called next billion online users – to reach sites without using the .com by way of Internationalized Domain Names (IDNs).
The Master of Your Domain conference was produced by iBreakfast and Smart TLDs, and moderated by Paul Farkas, Esq., of Smart TLDs. It was sponsored by Afilias, Neustar, Verisign, Dot Green, Definition 6, and Herrick, Feinstein LLP.
Audio Transcript of Dyson Session
Posted by Startupalooza at 9:21 AM No comments:

How to Destroy a Company in 30 Clicks

Posted by Startupalooza at 8:40 AM No comments: