When Tech Seemed Irrelevant: iBreakfast Looks Back to 9/11

Despite everything – we had a hero. But not who or what you expected…. 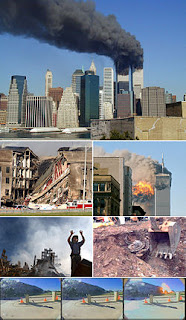 9/11 was a double whammy for Silicon Alley. The dotcom bubble had burst in April 2000 and by September 2001, whatever was left of the first wave of dotcom'ers was barely hanging on. We had even scheduled an iBreakfast about coming back from the crash with BusinessWeek editor and author, Michael Mandel.

We remember the personal tragedies: the crowds gathered at open air spaces all over Manhattan holding up pictures of loved ones and asking if anyone had seen them. These were the saddest gatherings I have ever witnessed…..especially because we all knew the answer.

As for Silicon Alley, it seemed irrelevant.

The pictures they held up were not digital. Social Media had not arrived to make to connecting with loved ones easy. My neighbor, one of the few survivors from Canter Fitzgerald, was only recognized in the hospital because of his dentist’s business card in his jacket.

Digital was just not around. Cell phones were the primary means for people to connect. One colleague, who was in the concourse beneath the towers, was warned to get out by a phone call from a relative in London!

The only contribution made by a member of the Silicon Alley community that I am aware of, was by Andrew Furber, who happened to be a volunteer on a retired NYFD Fireboat. Andrew went down to Battery City with the fireboat, doused the fires with their powerful hoses and then cut away rebar to help trapped survivors. All pre-war technologies and the Fireboat was a survivor of that depression too.

Later, when Andrew got home, he took time to update his website.

The rest of us were just helpless bystanders or worse, victims.

The iBreakfast held a Silicon Alley Town Hall meeting called the Technology Response Council and followed up with several events that introduced us to facial recognition (Visionics), document verification and various security-related technologies.

In our Town Hall Meeting we drew some of the following conclusions:

It is worth asking how we would cope if a terrible disaster were to happen today?

One thing is certain, the dotcom revolution not only survived but moved to center stage.

REPORTS FROM THE 9/11 ERA ON SILICON ALLEY

A Special thanks to Michael Drapkin for Remembering

How many of us have felt remarkably useless in the aftermath of the Sep. 11 attack?

You wouldn't if you were Andrew Furber, an e-business integration project manager who has worked with the iBreakfast organization on several projects in the past. Furber had been a volunteer member of the John J. Harvey, a retired 1931 New York City fireboat that group of enthusiasts had revived. His work on board, and on her pier] as a welder and engineer led him to a fill-in job after he was laid off from his company, dmind.

On the day of the bombing he was cycling to work on Pier 63 in the Chelsea area when he saw the flames appear on the Towers. As he headed toward the fireboat he saw dazed people stumbling up the West Side Highway.

When he arrived, he learned that NYFD dispatchers had called the mighty fireboat back into service under her last designation as Marine 2. As a working fireboat with powerful water pumps, she was critical to the rescue effort because the water supply downtown had been incapacitated.

When they arrived at Ground Zero the fireboat crew set about reconfiguring the hoses to supply water to the firefighters. Furber, whose background is in telecommunications, satellites and the web was pressed into service as an oxyacetylene steel cutter. Wielding his fiery torch, he followed the rescue crews to cut apart steel beams so that trapped people could be retrieved.

Furber returned to the site every day working long hours until Friday when he was shut out of the site because of heightened security during President Bush's visit.

When asked how he dealt with the horrific scene, Furber, who has nothing more than a lapsed CPR and 1st Aid instructor certification, said "I am really lucky that I was able to help." Being able to do something made him quickly get over the horror. And weeks later he has adjusted well, knowing that he had an effective part to play in the Tragedy.

We are very proud of Andrew at the iBreakfast and we would like to honor the spirit of volunteerism and simple, matter-of fact heroism he exemplified. For those of you who wish to share your good thoughts, contact him at SAiBC@andrewfurber.com. For those fascinated with the little fireboat that could, visit www.fireboat.org.

After a moment of silence, the September 25 iBreakfast considered the terrible events we have encountered. No one really asks to be a prophet but it was hard to ignore the sadly prophetic tone of the event: it had been specially scheduled later than the typical 3rd Wed. to avoid the High Holy Days, and the topic - recovering from the depression was, in the words used to describe the speaker, Michael Mandel's book, "eerily prescient."

Mandel, the economics editor of BusinessWeek, who also wrote this week's cover story, predicted the drastic depression, in his 2000 book, "The Coming Internet Depression" because of the underlying business model of innovation that he had discerned: technology R&D had essentially been outsourced to VC-funded start-ups. Since the whole industry had grown on the expectations of VC returns from IPOs and colossal buyouts more than the start-ups collapsed: big companies had been feeding off the start-ups and the telecom expansion which in turn had been paying for the massive underlying infrastructure. Once the market collapsed, it would do a great deal more harm than damage a few VC portfolios -it would undermine the entire technology, new media and telecom chain.

The reason he predicted that the depression would be even worse than expected is because the major corporations may have survived, having outsourced their R&D, now had very little new product in their the pipeline.

Nevertheless, Mandel felt there was enough of an infrastructure in place that the outlook was fundamentally optimistic for the long term. The shakedown, in that scenario was probably healthy.

But that was before September 11th.

The future is much more difficult now: government support will never be enough to recover losses, the human and business confidence losses will continue for months to come, there is no equivalent of turning technology factories into war production factories and it is clear that the government will take over what had once been the free market and VCs for funding and business support.

That means a slower moving, substantially less entrepreneurial environment. But the industry will have to get used to it in order to get along.

In a panel following Mr. Mandel's speech with Larry Chase from Chase Online Marketing, Michael Drapkin from XB5 and Mark Oster from Grant Thornton, it was clear that companies need to think long and hard about back up procedures and much business will surround the retooling of business for security. If there is a bright spot - it is that spending for civilian security will increase dramatically and that may present opportunity for entrepreneurs.