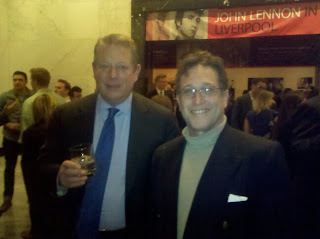 My meeting with Al Gore at Social Media Week.
Good old Social Media Week. It brings up great topics - like our TV Goes Social iBreakfast - and it brings out the stars like Al Gore. It turns out we have a common interest in the Tobacco Industry! When he was Vice President, he stood up to the tobacco industry. As a southern politician with presidential ambitions, that took a lot of guts. Like Mandela’s release from jail – it was one of the things I never expected to see in my lifetime. While Al Gore did not risk his life the way Mandela did, his stand had its own world-changing effect: the great $250 billion tobacco settlement of 1997 and a fundamental change in smoking regulations here and around the world.

My interest in Tobacco is a little more academic. My book Cigarette Seduction is about the marketing research behind the brands, how that defines smokers and cultures (brands vary dramatically by country) and how smokers can use that knowledge to quit.
Al Gore believes that Tobacco Companies are evil. While I don’t necessarily disagree with him, I do think it’s a little more complicated. They are addressing some fundamental human needs. If we don’t understand what they are and how to deal with them, they will just re-emerge – probably in more harmful forms. In that respect, Tobacco Companies are, to certain people, the good guys - and you have to accept that.
In any case, I salute Al Gore who is really warm guy in person. I thank him for his Nobel Prize-winning work on Global Warming - it has made us think green and electrified ours and our children’s generation.
Just one thing - and sure, this is a cheap shot - with this rotten winter, we could use just a little global warming right now……
Posted by Startupalooza at 12:51 PM