Trump Puts the Clown in Crowdfunding 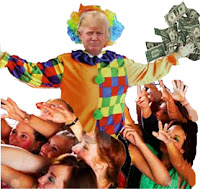 Thanks to Donald Trump and the extraordinary spectacle played out at Trump Tower yesterday, we just got a glimpse of crowdfunding as a nightmare: people crammed against each other as they clawed the air for MONEY.

As Trump put it, he wanted to take crowdfunding away from "Brooklyn hipsters." That he did, as a money-maddened crowd sprinkled with street people, brayed for bucks.

The site he is promoting, Fundanything.com, which is actually managed by his old pal, Learning Annex's Bill Zanker, borrows from Indiegogo.com. It accepts all comers and charges 9% if you don't make your goal and 5% if you do (vs. Indiegogo's 9% and 4%).

The site is open to all comers and there is no community follow-up or any kind of vetting of deals.

The only bright side to this picture is that Trump is offering to fund a choice few projects and so the publicity may bring some attention to other projects on the home page.

If you are sorry you missed yesterday's spectacle, do not fret, the two expect to do live events around the country on the theory that it will bring more attention to the projects. The reality is likely to be more money stampedes - the ugly realization of our jobless recovery and our fascination with entrepreneurship-for-everyone.

Nevertheless, it is part of a trend. Last week, we reported that Shark Tank's Barbara Corcoran joined the board of RockthePost.com, a pioneering equity crowdfunding site featured on our podcast, The Entrepreneur Show.

So - do we continue to be amazed at the miracle of crowdfunding - the wisdom of the public as it puts its trust in the ideas of a good few? What the JOBS act is about to turn it into a wealth-sharing vehicle for the rest of us?

Or, are we about to see it transformed into a freakshow to amuse the rich whenever they feel like sprinkling bills before beggars? A massive joke where people compete against each with sob stories or half-baked ideas in search for suckers. A high tech way of washing your windshield?

The answer depends on which side of the velvet rope you were standing last Wednesday at Trump Tower.

Additional stories in the Verge and Techcrunch.
Posted by Startupalooza at 11:10 PM

I have a reality show, "I Never Repeat A Joke." It's been 3 years; 51 shows @ 27 comedy venues across Illinois. I was told by Lakeshore Entertainment if I reach 1 million visitors they will offer me a TV contract. Newspaper feature: http://goo.gl/ubd1C.

Ask Mr. Trump to clownfund it.